I seriously cannot believe our last week of summer break is over, and that yesterday was the first day of school for my kids. (Whaaaaat?!) I know many parents are excited for school to start, so kids and the family can get back to some sort of regular schedule (even if that schedule looks way different this school year than years past). But for me, I have loved the free play time my kids have had really since quarantine began back in March. So I’ll admit, I’m sad our summertime break is over. But we made the most of it by having a great final week of “at home summer camp” with several Hamilton-themed activities!

For more details on how we approach our super simple, one-activity-a-day summer camp at home, check out my post from last week on our Greatest Showman camp. Christmas in July was another example of how we just did one (or two) fun things each day. And of course, you could use any of these Hamilton-themed “camp” ideas for a Hamilton party, celebration, or viewing party, too! Be sure to check out our Pinterest board for all the Learning, Baking, Crafting, and Performing ideas below (and more), and visit our Hamilton Party board for even more ways to celebrate this fabulous musical/movie!

Of course we watched the Hamilton film (again) to kick off our week. If you haven’t seen it yourself and are wondering whether or not it’s appropriate for your child(ren), check out the Parent’s Guide that I created. It has been super helpful to a lot of my friends.

My kids decided to create impromptu costumes throughout the week, so my son wore a King George III-inspired costume while he watched. {Much to my dismay, he has started saying that he thinks “Hamilton” is boring–gasp!–but he did watch the movie with us (again) and does enjoy singing the King’s songs. And he apparently likes dressing up as and acting like the King. So all hope is not lost!}

My daughter turned herself into Eliza while they colored, and then she went all-out and pulled together costumes for Angelica, Peggy, and Maria, too. (Check out the awesome video she made at the bottom of the post!)

Oh, and somehow–I have no idea how–I completely missed that HAMILTON was actually doing a “HamWeek” all week. Yes, the same exact week as our own Hamilton-themed camp. Totally missed it. But if you happened to catch any of their fun throughout the week, I’m sure it was great!

My kid have admittedly already learned a lot about Hamilton, because we have listened to the soundtrack (on our Amazon Alexa, which is set up to mute the curse words) multiple times a week for the past 18 months (yes, really), and they ask a lot of questions. {Did you know I’m almost done writing a Kids’ Guide to Hamilton, inspired by their many questions?! Be the first to find out when it’s available!}

I still wanted to include a few “learning” aspects to our camp, so on Day 1 I asked them what they wanted to learn more about, or what they still had questions about. They asked about the duel, so I shared some info with them over lunch the first two days. 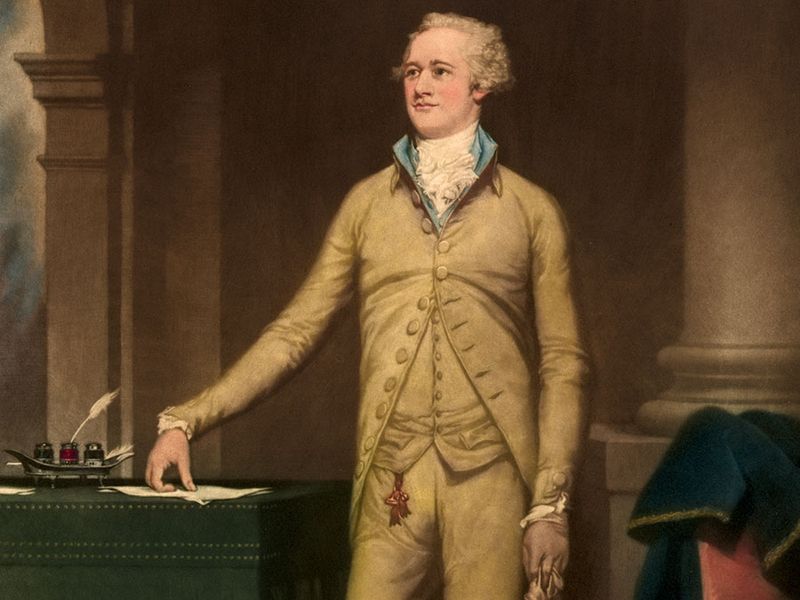 On Day 3, we revisited the meaning behind Eliza’s gasp at the end of the show. When I watched the film on Disney+ July 3rd, I went down a rabbit hole on the internet, trying to figure out if there was any clear explanation from Lin-Manuel Miranda or Phillipa Soo, who plays Eliza, on the meaning of the gasp. During camp week, the kids asked about it again and I found a more recent “explanation” directly from Phillipa. (Skip to the 2:30 mark if you want to get right to her response.)

On the last day of camp, we learned about how ice cream was made back in Washington and Hamilton’s day, in preparation for us making our own ice cream (see Baking & Food, below)!

Edited to add: There’s one more GREAT resource I forgot to mention! My daughter and I have also spent quite a bit of free time over the past few weeks checking out some of the numerous, amazing resources currently available through the “EduHam at Home” program. There are videos from Lin-Manuel Miranda, Tommy Kail (the director) and many of the cast, as well as inspirational student performances, a plethora of original documents and related research, a timeline of Alexander Hamilton’s life and the formation of the United States, and so much more! It’s available through the end of August 2020, and it’s all FREE! If you’re interested in learning more about the show or the history that inspired it, sign up right now and soak it all in before the month ends! (Kids can also submit their own poems, songs, or performances inspired by the history of Hamilton’s time!)

I gave the kids several options to choose from for our baking fun, and they chose molasses cookies, journey cakes, and ice cream. I really wanted to give “pan-fried bread and butter pudding” a try, but we’ll do that another time.

We made the molasses cookies on Day 3, using a recipe from 1784! We talked about how it’s very likely that some of our direct ancestors may have eaten these exact same cookies 250 years ago, which is pretty amazing! And let me tell you, these cookies were delicious! Like, unbelievably yummy. I highly recommend you make them ASAP. The only ingredient we didn’t already have in our pantry or fridge was molasses. The kids had fun rolling the dough into balls and then rolling those in sugar.

All four of us gave these cookies five stars, they were just so tasty! The recipe made about 40-50 cookies.

Next up was “journey cakes,” which we made on Day 4, using a 1775 recipe (isn’t the internet amazing?!). Apparently historically these are considered somewhat similar to hoecakes, or Johnny Cakes, which are made from corn, but I’d say they turned out to be closer to a rice-and-egg muffin. (Hoecakes are flatter, whereas our journey cakes were made in a muffin tin.)

I wasn’t sure how these would taste, but again, this was another huge hit! The kids and I all loved them. We made the rosemary-garlic version and added about 1/3 cup of shredded sharp cheddar before pouring them into the muffin tin. We also made our own rice flour, since we didn’t have any on hand. We just took about 1.5 cups of uncooked rice (which we put in the freezer overnight) and ground it up in the blender. Super easy!

TIP: I used a ladle to get the mix from the bowl to the muffin tin–it’s very soupy before it’s baked.

And here they are, baked and ready to eat!

Sooooo delicious! The recipe made 18 journey cakes. I had wanted to make hoecakes at the same time, so we could try them side by side, but our cornmeal had expired (by two years, yikes!), so we didn’t make those.

Our last baking project was peach ice cream, made from a recipe originally by Mary Randolph, in what was one of the first cookbooks ever published in North America (1824). The recipe has been “adapted for the modern kitchen” by the Mount Vernon Inn Restaurant.

A little history: In early colonial days, ice cream was a treat only enjoyed by the wealthiest people. You can learn more about it here. George Washington loved ice cream, so we talked about that and how hard it was to make back then. We also talked a bit about how Washington had slaves, and how wrong that was, and how he not only didn’t free his own slaves until after his (and Martha’s) death, but he also didn’t try to make all slaves free when he was President. So, my kids are well aware that even though he is considered to have been a great President, he had a really, really big flaw.

We made our peach ice cream using several modern conveniences, such as a refrigerator and an ice cream machine we got as a wedding gift to go with our Kitchen Aid. I thought about trying to make it the way the Mount Vernon video shows it was made in the late 1700s, but it was just too much work to really consider 😉

We halved the recipe and it still made a lot–the four of us have already had moderate servings of it twice, and we’re only halfway through the batch.

Ice cream was served in “ice pots,” which were small cups, so we decided to serve ours in my husband’s late grandmother’s tea cups. It looked adorable, felt fancy, and made us feel a little more connected to how Washington and others would have enjoyed the tasty treat.

I found a few great coloring pages and, as always, the kids loved coloring them on Day 1 after watching the movie.

On Day 5, I invited the kids to create their own raps or songs based on something from Hamilton’s story, or by rewriting lyrics to one of the songs from the show. My son was busy playing with his Lego robot most of the day, so he didn’t want to make a new song. But my daughter grabbed the fabulous Hamilton: The Revolution book we have, so she could look at the full lyrics to rewrite one of the songs. Here are her two final versions, below, based off of Phillip’s rap in “Take a Break.”

One other activity we started but got sidetracked from finishing was talking about what we want our own legacies to be. I know that’s a bit deep for a 5- and 8-year old, but I thought we could talk a little bit about how we want people to think of us and remember us. I even printed out this cool activity packet…so maybe we’ll still do it someday.

I had Pinned several karaoke versions of some of our favorite songs from “Hamilton,” but we didn’t end up using them. Instead, my kids had fun on their own making their own videos!

On the first day, my daughter planned a super short mash-up video of Charles Lee and King George III: 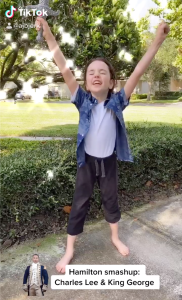 The very next day, my daughter was so excited about the costumes she had come up with for the Schuyler sisters (Angelica, Eliza, Peggy), and Maria Reynolds, that she wanted to do a “transition” video on TikTok. So we worked that out together, and it turned out really great! I’m super proud of her. Here’s my Instagram link to the video, as well as the TikTok link.

I’m so glad we were able to have a great final week of summer before school. The “Hamilton”-themed ideas for fun are truly endless. I hope something we’ve shared inspires you to celebrate “Hamilton” your own way someday soon. Be sure to check out our Hamilton Summer Camp board on Pinterest for all of these ideas and more, as well as our Hamilton Party board on Pinterest. I’d love to hear how it goes if you try out any of these ideas!

This site uses Akismet to reduce spam. Learn how your comment data is processed.